ORIGIN OF THE MIRROR

Before the invention of the mirror, man had only the surface of still water to contemplate his image. The earliest mirrors were probably still bodies of water and rocks or clay vessels containing liquid. 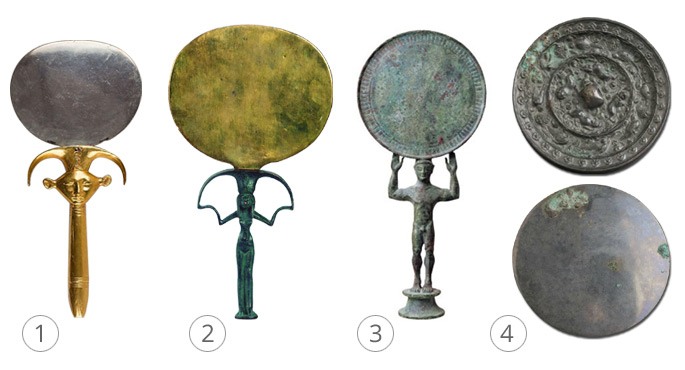 The earliest “manufactured” mirrors date from around 6000 BC, in the region of Anatolia (present-day Turkey). These mirrors were then pieces of polished stone like obsidian, a natural volcanic glass.

About 2000 years later more reflective mirrors with a polished metal surface were obtained.

Polished metal mirrors such as bronze, copper, silver, gold, tin have been used for centuries. Always small in size, they were rare and precious. At the time it was the quality of the polishing of the surface that offered a more or less important power of reflection. But this technique did not produce high quality mirrors and the surface oxidized quickly.

According to some scientists, the first metallized glass mirrors were invented in Sidon, present-day Lebanon, in the 1st century AD, and then the technique developed under the Roman Empire. The mirrors were made from polished rock crystal with gold, silver or lead foil applied to it. Very small, 2 to 7 centimeters in diameter, these early glass mirrors are more like amulets or adornments. The poor quality of these will make them prefer mirrors of polished metal, especially tin alloy for the Romans, for several centuries.

In the 5th century, the Chinese began to manufacture mirrors using silver-mercury amalgam. This new technique will inspire European manufacturers of the Renaissance (16th century) a few centuries later, by making a glass mirror covered with a tin-mercury amalgam.